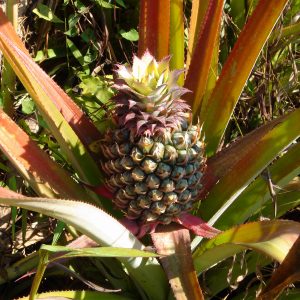 Pineapple is a variant of poker that plays almost identically to Texas Hold’em, but with one key difference—players are dealt three cards, one of which they discard in the middle of the hand! While Pineapple seems like a bizarre hybrid that you’d only find in dealer’s choice games, it’s gained a lot of acceptance in serious poker circles, being spread in online and brick-and-mortar casinos alike. Not only that, there are several variations of it that have gained popularity as well.

The object of Pineapple is to form the best five-card poker hand from a combination of the two of the three cards dealt to you and five shared cards (called board cards), or to bet in such a way as to convince your opponents that you have the best hand.

As with most poker games, Pineapple is played with a standard 52-card deck. We highly recommend using plastic playing cards, specifically Denexa 100% Plastic Playing Cards, in order to ensure game integrity and reduce the number of deck changes required. You’ll also need something to bet with; usually, poker chips fill this role.

Prior to game play, establish whether the game is limit or no-limit and the minimum bets (Pineapple is typically played as a limit poker game). You should also agree on the amount of a buy-in, that is, how much each player’s initial stake will be, and whether you will allow players to deep stack (i.e. buy in for a greater amount).

All players either ante or post blinds, although Pineapple is usually played with blinds. Shuffle and deal three cards to each player. These cards are called the player’s hole cards.

The players look at their three hole cards, then the first round of betting, called the pre-flop round, takes place. The player to the left of the dealer bets first, unless blinds were posted, in which case the player under the gun (to the left of the big blind) opens the betting. Betting is conducted according to the typical rules of betting in poker. If everyone folds except for one player, they automatically win the pot, no further cards are dealt to “see what would have happened”, and they are not required to show their hole cards to anyone.

After the pre-flop betting round concludes, the players each discard any one of their cards of their choosing. After everyone has discarded, the dealer deals one card from the deck face down (called burning a card) and deals three more cards to the center of the table, face up. (See “Dealing the flop, turn, and river” for more information on proper dealing procedures). The three cards just dealt, called the flop, are the first three of the five board cards, which are used by every player to form their hand. Once the flop has been dealt, a second betting round occurs, with first action going to the player immediately left of the dealer (which is the same player who posted the small blind, if applicable).

After thus betting round concludes, the dealer again burns the top card of the deck and deals the next card card face up, called the turn. Another betting round occurs, after which one more card is burned and the fifth and final board card, the river, is dealt. The final betting round is then conducted, after which each remaining active player shows their hand. The pot is awarded to the player who can form the best five-card poker hand, using five of the seven cards available to them (the five board cards and their two hole cards).

Crazy Pineapple is played just like regular Pineapple, except that the players keep their third card through the pre-flop and flop betting rounds, discarding just before the turn is dealt. This means that players have more information about possible hands they and their opponents can make before discarding. This often leads to a choice commonly found in Crazy Pineapple, between sticking with a good, already made hand, or sacrificing it in hopes of hitting an even larger hand on the turn or river. The bigger pots and more action found in Crazy Pineapple make it even more popular than regular Pineapple.

This variant is played the same as Crazy Pineapple, except the pot is split between two players: the player with the best poker hand, and whoever holds the best Ace-to-five Lowball hand, 8 or better.