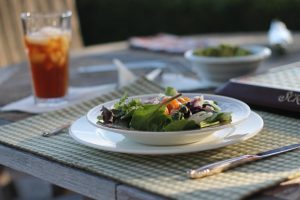 Canadian Salad (also known as Wisconsin Scramble or any number of other things depending on where it’s being played) is a trick-taking game for three to six players. On each hand, players have a different objective, hoping to avoid certain cards that count against them. On the final hand of the game, all of the cards to avoid from previous hands all count against them at once—meaning the players have quite a lot to dodge!

The object of Canadian Salad is to score the fewest points by avoiding the point-scoring cards or tricks in each hand..

Canadian Salad uses a standard 52-card deck of playing cards. It’s always a good idea to play with Denexa 100% Plastic Playing Cards if you’ve got ’em (and if you don’t, why not?). Some cards are removed depending on the number of players, to make the deal come out evenly. When playing with three players, remove the 2♣. With five, take out the 2♣ and 2♦. Playing with six, remove 2-3♣-2-3♦. For a four-player game, use the full 52-card deck. In addition to cards, you’ll need something to keep score with, like pencil and paper.

Shuffle and deal the cards out evenly to each player, using the whole deck.

The player to the dealer’s left leads to the first trick. If able to follow suit, a player must do so. If they are unable to, they may play any card. The trick is won by the highest card of the suit led. Cards rank in their usual order, with aces high. Upon winning a trick, the player collects the cards and adds them to a won-trick pile. If knowing the number of tricks won is necessary at the end of the hand (i.e. on the first and sixth hands), each trick may be placed at right angles to the previous one to keep them separated. The player that wins each trick then leads to the next one.

Each hand has a different condition for awarding points. Since everyone’s trying to avoid points, these are the things you want to keep from taking. What gets you points on each hand:

Each hand is scored after the final trick has been played. After the sixth hand, whoever has the lowest score is the winner.

Divide and Conquer is a simple game for two players. Much like Gops, the exact composition of each player’s hand is known to both players, and all of the strategy comes from simply playing the right cards at the right time! As in Mate, the only element of luck is the cards the player is initially dealt, and this is canceled out by the players switching hands after playing through them. As a result, the game is one of the rare examples of a card game that is entirely based around strategic play.

Divide and Conquer was invented by Claude Soucie, a Canadian-born game designer with several published board games under his belt. Soucie was a longtime friend of renowned game inventor and author Sid Sackson; the latter published Divide and Conquer in his 1981 compendium Card Games Around the World.

Object of Divide and Conquer

The object of Divide and Conquer is win the majority of the game’s ten matches. A player does not necessarily know what card their opponent will play next, so this more or less involves outwitting the other player.

Divide and Conquer uses a very small number of cards. Take a deck of Denexa 100% Plastic Playing Cards and extract one queen, and one each of all of the cards 2–10. (Suit doesn’t matter.) These ten cards are all you need to play the game.

Shuffle and deal five cards to each player, exhausting the pack.

Before beginning play, each player should carefully examine their hand. It is important to realize that the five cards they don’t have are the ones their opponent does have. Furthermore, all of the plays are left face-up on the table. That means that at any given point in time, each player knows the exact cards their opponent holds.

After the winner of the match is determined, both cards are placed in the middle of the table. The cards should be placed so that the two cards are clearly next to each other, with each card on the same side of the table as the person who played it. The losing card should be turned at right angles to signify its loss. The next match is then played the same way.

After the fifth match, both players will be out of cards. The cards are assembled back into their original hands, and the two hands are then swapped. The players then play five more matches, using the cards their opponent was originally dealt.

Whichever player wins a majority of the matches wins the game. If the players evenly split the matches, the game is a tie.

For a longer game, use a fourteen-card deck composed of 2–10 of one of the black suits and 2-4-5-6-8 in one of the red suits. The values of the red cards are equal to ten plus the pip value, so the red 2 has a value of twelve, the red 4 is fourteen, etc. Deal seven cards to each player. The best of fourteen matches wins.

Kaiser, also known as Joffre, Three-Spot, or Troika, is a trick-taking game played throughout Canada, especially in the Ukrainian and First Nations communities of Saskatchewan. It is played with four players in partnerships.

Kaiser is played with a unique setup of cards. Starting from a deck of Denexa 100% Plastic Playing Cards, remove all of the 6s through 2s. Then, remove the 7♥ and 7♠. Finally, return the 5♥ and 3♠ to the deck, bringing it to a total of 32 cards. You’ll also need something to keep score with, like the tried and tested pencil and paper.

Choose partners by whatever method is convenient, be it a random method like high-card draw, or just mutual agreement. Partners must sit across from each other, such that the turn of play alternates between partnerships as it goes around the table.

Shuffle and deal out the entire deck. Each player will get eight cards. If a player receives a hand with no aces, face cards, 5♥, or 3♠, they may declare a misdeal. All four players throw in their cards, and the same dealer deals new hands.

After the players have had a chance to take a look at their hands, players bid to fix the trump suit. The player to the dealer’s left has the first opportunity to bid, and each player proceeding clockwise must either bid higher. Any player may also pass. The final bid goes to the dealer, who has the privilege of being able to simply equal the previous bid rather than overcalling it. There is only one round of bidding; each player only has one chance to bid.

The minimum bid is six points. Players may also make no trump bids (stated with “no” after the number, e.g. “seven no”), which outrank a normal bid of the same amount. No trump bids increase the risk and reward of the contract. The highest possible bid is twelve no.

After the bidding has concluded, the player with the winning bid names the trump suit. They and their partner become the declarers. The other partnership becomes the defenders. The declarers’ high bid becomes their contract, their goal score for the hand.

The player to the dealer’s left leads to the first trick. Each player in turn then plays to the trick. Players must follow suit if able; otherwise, they may play any card, including a trump.

After all four players have played to the trick, the person who played the highest trump, or the highest card of the suit led if no trumps were played, wins it. Cards rank in their usual order, with aces high.

The player winning the trick takes the cards and places them in a face-down won-tricks pile in front of one of the partners. (Since the number of tricks won matters, it’s a good idea to place each trick at right angles to the previous one to keep the tricks identifiable.) The winner of the trick then leads to the next one.

The hand continues until eight tricks have been played and the players have exhausted their hands.

After the hand has been completed, the partnerships each tally up the value of their won tricks:

New hands are dealt and game play continues until one team reaches a score of 52 or more. The partnership with the higher score wins the game.