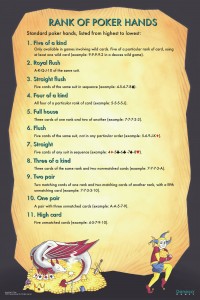 No matter which variant of poker you play, the rank of poker hands always stays the same. The hand ranking was determined over a hundred years ago, with each hand’s rank roughly corresponding to the likelihood that a particular hand will occur (unlikely hands are ranked higher), although the exact odds for each hand will vary between different types of poker.

We now offer a Rank of Poker Hands poster (image at right) that can be displayed in your game room to help your newer players learn the hands and the order they rank in. It’s an excellent way to head off questions about what outranks what that can reveal to other players what might be in the newbie’s hand.

The standard rank of poker hands is: