Dealing the flop, turn, and river 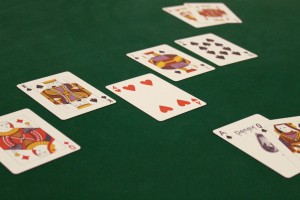 Two of the most popular poker games today, Texas Hold’em and Omaha, both share a defining characteristic—five community cards, dealt face up in the middle of the table. Despite the apparent simplicity of the task—it’s just dealing five cards!—a lot of players do it wrong. Here, we’ll explain the right way to do it, and the most common pitfalls for amateur dealers.

After the initial betting round has been resolved, the dealer taps the table with their hand. This is to attract the players’ attention and inform them that the flop (the first three board cards) is coming out, so that if betting action is still taking place, the players can speak up. After this, one burn card is dealt, face down. Most dealer procedures advise tucking the burn cards under the chips in the pot for safe keeping, although casinos may have variations on this rule (such as tucking a corner of each burn card under the face-up card it preceded). Three cards are dealt, face down, then the group is moved into position in the center of the table, flipped face up, and spread out all at once.

Dealing the turn and the river

The turn and the river are the cards dealt after the second and third betting rounds, respectively. The procedure for dealing both of these is the same—tuck one burn card under the pot, and turn one card face-up, placing it to the right of the previously dealt cards.