Ultimate Texas Hold’em, often abbreviated as UTH, is an adaptation of Texas Hold’em to the player-versus-the-house format of casino table games. Two to eight people (including the dealer) can play.  Introduced during the height of the 2000s poker craze, Ultimate Texas Hold’em is a more approachable game for players that may be intimidated by the more confrontational style of betting found in traditional poker games.

As with Three Card Poker, you won’t usually find the UTH tables in the poker room. Instead, look for them in the pit, alongside the Three Card Poker and Blackjack tables.

The object of Ultimate Texas Hold’em is to recognize when you hold a hand that is likely to form a better poker hand than the dealer’s. This allows you to take advantage of opportunities to bet higher (and thus hopefully be paid higher). Alternately, the object is determine when the hand isn’t worth playing and exit the game to avoid a greater loss.

Ultimate Texas Hold’em is played with a standard 52-card deck of playing cards. If you’re playing at home, why not take advantage of the opportunity to get out your Denexa 100% Plastic Playing Cards? You’ll also need chips for each player to bet with. The dealer should be provided with a generous amount of chips for paying out winning wagers.

Casino UTH tables are covered in a felt surface with betting circles pre-printed on them, to organize the four bets that are available to the players. (An example of such a betting layout is shown at below right.) Unlike public-domain games like Blackjack, you’re unlikely to find UTH layouts available from anyone but Scientific Games. If you’re planning on dealing a home game instead of just playing in a casino, you’ll need to put one together yourself.

Players make their initial bets, as described below in “Making the initial bets”. After each player has bet, shuffle and deal five cards, face down; these will be the board cards. Deal two cards, also face down, to each player, including the dealer. These are the players’ hole cards.

Cards rank in their usual order in UTH, with aces high (although they can be used in an A–5 straight). Hands rank in the typical order; see rank of poker hands if you need a refresher. 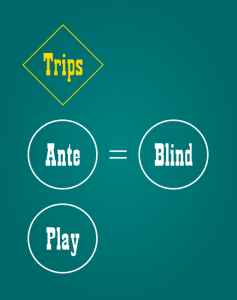 The basic bets in UTH are the Ante and Blind bets, which most players will usually make. A player must make both bets, or neither of them; the amount placed in each betting circle must be equal.

A player may also choose to make an optional Trips bet. The Trips bet pays based on the best hand a player can make between their two cards and the five community cards. Whether or not the player’s hand is better than the dealer’s is immaterial to the outcome of the Trips bet. A player may choose to bet only the Trips bet, and not the Ante and Blind bets.

The Play betting circle remains empty until later on in the hand.

After receiving their hand and being allowed to do so by the dealer, the player looks at their two cards. The dealer proceeds around the table, from left to right, giving each player their turn. On their turn, they may, if they wish, make their Play bet, which must be either three or four times the amount of the Ante bet. Otherwise, they check by tapping the table.

After all players have had a chance to bet or check, the dealer reveals the flop (the first three board cards). Each player who has not already made a Play bet gets a turn now. If they wish, they may now place a Play bet equal to twice the Ante bet. They may also check again, if they still do not wish to bet.

The dealer then reveals the last two board cards. Players have one last chance to make a Play bet, which is now limited to be exactly equal to the Ante bet. If a player still doesn’t want to bet, then they fold, surrendering all of the bets they’ve made to the dealer.

When all players have made a Play bet or folded, the dealer turns their hole cards face up. They declare the best five-card poker hand they can make using their two hole cards and the five board cards. If the dealer has at least a pair or higher, they are said to qualify. If the dealer does not qualify, the Ante bet will push, but the other two bets will still be paid out normally.

The payouts for the Trips and winning Blind bets are as follows:

After every player’s bets have been resolved, the cards are shuffled. Players then make their bets for the next hand.

The Ultimate Texas Hold’em logo is a registered trademark of Scientific Games. It is used here under U.S. fair use laws.