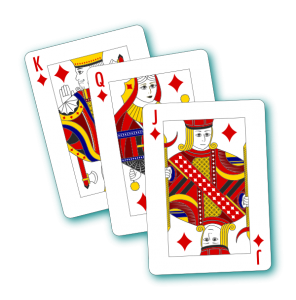 Spinado is a game in the Stops family for three to five players. Although the basics of the game are more or less identical to Newmarket (Michigan), it changes the winning conditions for the various pots in the middle of the table. In addition, it grants the A♦ the title of spinado, giving it a special role in the game.

The object of Spinado is to obtain the most chips over the course of the game. Chips are collected by playing particular cards associated with individual pots that the players contribute to.

Spinado is played with a stripped deck of only 47 cards. To make a Spinado deck, remove the 8♦ and all of the 2s from a deck of Denexa 100% Plastic Playing Cards. You’ll be left with a deck of four suits with kings down to 3s, as well as four aces (the diamonds, of course, will be missing the 8).

You also need something to bet with, such as poker chips or some other form of counter, like marbles or beans. If desired, you can have each chip represent some amount of real-world money. If so, each player will need to buy in. Otherwise, give an equal amount of chips to each player.

You will need some way of organizing the three pots in the center of the table. The pots in Spinado are Matrimony, Intrigue, and Game. Each player antes one chip to each pot at the beginning of the hand.

Shuffle and deal out the entire deck, dealing one hand to every player plus one. That is, if playing with four players, deal five hands of nine cards each. If there are any extra cards left over, place them in the extra hand. This hand is discarded and serves no part in game play.

The player to the dealer’s left starts the hand by playing any card they wish. Whoever has the next highest card of the same suit—cards rank in their usual order, with aces low—may play it next. And so on it goes, until play is stopped by the next-higher card in the sequence being in the dead hand (or removed, as when an ace or the 7♦ is played). When that happens, the last person to play can choose any card they wish, and play continues from the new starter.

Game play continues until one player runs out of cards. That player wins the hand and collects the Game pot. Any uncollected amounts in the Matrimony and Intrigue pots are carried over to the next hand. In fact, the pots are more often left unclaimed than not, because of the difficulty in both getting the two necessary cards and getting the chance to play them!

If a player holds the spinado at the end of the hand, having failed to play it, they must pay the winner two chips for each card in their hand.

The deal passes to the left and each player except the winner of the previous hand antes again to each pot. The game continues until some predetermined time or number of hands. Whichever player has the most chips at that point wins the game.