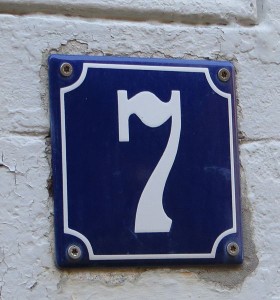 Sedma (from the Czech for “seven”) is an unusual trick-taking game from the Czech Republic. It can be played by two to four players, with four playing in partnerships. Sedma’s main draw is its strange method for determining the winner of a trick—rather than the highest card, the last card played of the same rank as the starter—or a seven, which serves as a quasi-trump card—takes the trick.

The object of Sedma is to score the most points by collecting the most aces and tens.

Sedma is traditionally played with a 32-card north German pack (which is normally used to play Skat), consisting of aces, kings, ober knaves, unter knaves, and number cards from the 10 down to the 7 in the suits of bells, acorns, leaves, and hearts. To make an equivalent deck from American cards, start with a deck of Denexa 100% Plastic Playing Cards and remove all of the 6s down to the 2s, leaving only 7s and above. For a three player game, remove two of the 8s as well.

In the four-player game, two partnerships play against one another. Once partnerships have been decided (through mutual agreement or some random determination method like a high-card draw), players should be seated so that partners are across from one another and so that each player is seated between two opponents.

Shuffle and deal four cards to each player. The deck stub is placed in the middle of the table, forming the stock.

The player to the dealer’s left (i.e. the dealer’s opponent, in a two-player game) leads to the first trick by playing any card face up in the middle of the table. Play continues to the left, with each person playing any card they wish to the trick, with no obligation to follow suit or play any particular card. It is important for each player to place their card in such a way that the order of cards played and who played them remains identifiable. When all players have contributed, the player who led to the trick may either choose to continue it by playing another card of the same rank as the starter, continue it by playing a seven, or allow the trick to end. If they wish, they may even continue the trick for a third or fourth round (after which nobody will have any cards). When the trick ends, whoever most recently played either a seven or a card of the same rank as the starter wins the trick. The cards are collected by the player that wins them and placed face down in a won-cards pile (in the four-player game, one player from each partnership maintains their side’s win pile).

After each trick, each player draws one card in turn from the stock, starting with the winner of the trick and proceeding clockwise, until all players have four cards once again. The winner of the last trick then leads to the next one. When the stock is exhausted, game play continues without drawing until the players’ hands are depleted, at which point the hand ends.

At the end of the hand, the following scores are tallied:

Whichever side or player collected the most points is the winner. If one player or partnership collected all 90 points available , it is a double win, and if one player or partnership captured all 32 cards, it is a triple win. If the game is being played for money, the losers pay the winner the agreed-upon stake (doubled or tripled for double and triple wins accordingly).

Each hand may stand alone as its own game. If not being played for money, players may instead wish to score one, two, or three victory points for the winners and play to an agreed-upon win threshhold (e.g. ten victory points).