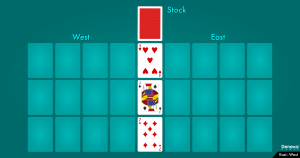 East–West is a poker game for two players. Much like Pai Gow Poker or Chinese Poker, the challenge in the game is placing cards you receive into one of three hands. East–West has two major differences with those games, though. First, there is one community card that you share with your opponent. Second, there is no gambling in this game at all!

East–West was created by German author Reiner Knizia. It was first published in German, in his 1995 Wild West-themed compendium of family-oriented poker games, Kartenspiele im Wilden Westen. The book was translated to English and published in 2007 as Blazing Aces! A Fistful of Family Card Games.

The object of East–West is to strategically place cards drawn from the stock into one of three poker hands. The ultimate goal is to win two out of the three hands.

East–West was created to be played with a German deck of cards. To make an equivalent pack from an English-style 52-card deck like Denexa 100% Plastic Playing Cards, just remove the 6s through 2s. You’ll be left with a deck containing aces through 7s in each of the four suits, for 32 cards in all.

Shuffle and deal three cards, face up, in a vertical line. These three cards are the board cards. Place the deck stub above the uppermost board card, forming the stock.

The nondealer goes first. They draw a card from the stock and place it next to any one of the three board cards, on their designated side. The dealer goes next, doing the same thing, placing their card on the opposite side. Players continue alternating in this way, drawing cards and placing them.

Each player thus builds three poker hands. Each hand consists of one of the board cards and the other cards on that row on their side. A player may only place cards on their side, not on their opponent’s. Once a player has placed four cards on a row, the hand is complete (making a five-card hand, including the board card) and no more cards may be added to it.

After both players have completed all three hands, players compare each hand with their opponent’s on the same row. Whichever player wins two out of the three hands wins the game.