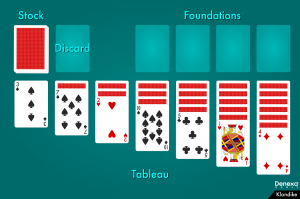 Klondike is probably the most popular solitaire game played, and is what most people are referring to when they simply say “Solitaire”. Klondike is included under the name Solitaire in Microsoft Windows, thereby becoming the bane of office managers everywhere. Despite Klondike’s popularity, it is fairly difficult to win; the vast majority of games are unwinnable before the player has made a single move.

The object of Klondike is to move all 52 cards to the foundations.

Shuffle and deal a row of seven cards, with the first card face up and the rest face down. Then, deal a second row of six cards, overlapping the first, starting with a face-up card on the second column and face-down cards in the remaining columns. Continue in this manner, starting with the third column, and so on until there is a face-up card on each column. (Refer to the diagram for an example layout.) These seven cards form the tableau. Place the deck stub at the upper-left, above the first tableau pile, forming the stock.

The majority of action in Klondike involves movement of cards in the tableau. Cards rank in their usual order, with aces low (K, Q, J, 10, … 2, A). Face-up cards may be moved so that they are on top of a card of the opposite color and one higher rank. For example, the J♦ may be placed on either the Q♣ or the Q♠. A series of cards so matched may be moved as a unit; a combination of the Q♣ and J♦ may then be moved together onto the K♥. When face-down cards are uncovered, they may be flipped up and used as part of regular game play. Empty spaces created when an entire column’s worth of cards have been moves can only be filled by a king (or a stack of cards with a king on the bottom).

Game play continues until all 52 cards have been moved to the foundations or no further moves are possible.

Two of the most common variations of Klondike impose additional restrictions on drawing cards from the stock. This makes the game more challenging, although it could be argued that winning Klondike is enough of an achievement already that adding more obstacles is kind of unnecessary.

One variation on Klondike requires that three cards be drawn from the stock at a time, and they are immediately placed on the discard pile. Since only the topmost card of the discard pile is playable, two of the cards drawn are inaccessible until the cards on top of them have been moved.

Another rule that can be played with is to limit the number of times the stock can be gone through, usually to three. After the third run through the stock, the game ends.