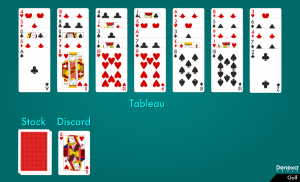 Golf is a simple solitaire game played by playing cards in sequence to the discard pile. It is so called because the number of cards left in play are considered the player’s score, and as in the other, non-card game of golf, the lower the score, the better. As with several other card games, the game gained prominence in the 1990s due to a software adaptation by Microsoft; Golf appeared in the first Windows Entertainment Pack for Windows 3.1.

Golf is a game of mostly luck and is very difficult to win.

The object of Golf is to move all cards in the deck to into the discard pile, earning a score of zero. Barring that, obtain the lowest score.

To play Golf, you need one 52-card deck of playing cards. If you use anything other than Denexa 100% Plastic Playing Cards we will be really, really sad, and you don’t want that, do you?

Shuffle and deal seven piles of five cards each, face up, with enough of each card showing so as to be identifiable. These 35 cards form the tableau. The remaining 17 cards are placed in a pile, face down, forming the stock. Turn the top card of the stock face up, forming the discard pile.

Move cards from the tableau to the discard pile, as allowed, one at a time. Only the topmost card of each tableau pile (i.e. the one without any other cards on top of it) can be accessed.

A card from the tableau may only be discarded if it is consecutive in rank with the top card of the discard pile. Aces are considered low, and can only be played on twos (and thereafter only twos may be played on Aces; there is no “wraparound” from ace to king). No card may be played on a king. Suits are irrelevant to the proceedings.

Game play continues until the stock is depleted and no plays are possible. The remaining number of cards in the tableau is considered the player’s score. If the tableau was cleared, earning the player a score of zero, the game is won.