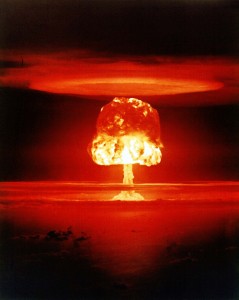 Go Boom is a game in the Stops family that plays similarly to Crazy Eights. Unlike in that game, however, the rank of the cards played matters immensely—control of the game goes to the one who plays the highest card. Go Boom may be played by two to six players.

The object of Go Boom is to be the first player to discard all your cards by matching cards played previously in rank and suit.

Go Boom uses one standard 52-card deck of playing cards. It should come as no surprise that we highly recommend Denexa 100% Plastic Playing Cards.

Shuffle and deal seven cards to each player. The remainder of the deck is placed face-down in the center of the table, forming the stock.

The player to the dealer’s left leads any card. The next player to their left must then play a card of the same suit or the same rank. For example, if the card led is the 5♠, they must play any other 5 or any other spade. If a player is unable or unwilling to play a card, they draw from the stock until they are able to play. If the stock is depleted, their turn passes without playing a card.

Once all players have had the chance to play, the cards are examined to determine the highest played on that round. Cards rank in their usual order, with aces high. If multiple cards of the same rank tie for highest, the one that was played first is considered the high card. The cards are then moved to a discard pile, and the player who played the highest card gets to lead to the next round.