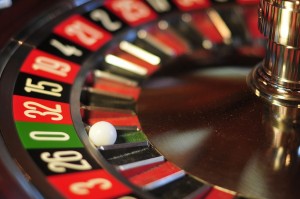 The gambler’s fallacy is the mistaken belief that after a series of random events occur, a certain outcome is “due” to happen, so that the series of outcomes is corrected to better match the odds of each outcome.

The simplest example is a coin flip. A perfectly fair coin will have a 50% chance of landing on heads and a 50% chance of landing on tails. It is unlikely, but possible, for the coin to land on heads five or even ten times in a row. If a coin lands on heads ten times in a row, what are the odds for the eleventh flip? Someone operating under the gambler’s fallacy would say that tails is almost certain to come up—but the odds are exactly the same; 50% for tails and 50% for an eleventh heads.

Another place where it’s easy to see the gambler’s fallacy is on the roulette wheel. A modern roulette wheel has eighteen red spaces, eighteen black spaces, and two green spaces. The odds are approximately 47% for red, 47% for black, and 5% for green. In 1913, an incident occurred at the Monte Carlo Casino where the ball landed on a black space twenty-six times in a row. Gamblers rushed to bet millions of francs on red, believing a bet on red to be almost a sure thing after such a long string of spins landing on black. Most of this money was lost to the casino.

Keep in mind that the gambler’s fallacy only really applies when each trial (a spin, a coin flip, and hand of cards, etc.) is an independent event. This is not always true in card games; the odds will vary as cards are distributed from the deck. In Blackjack, for instance, as aces are dealt from the shoe and discarded, blackjacks become progressively less likely. But it remains true that you are not “due” a win after any number of losing hands, meaning that betting systems that rely on this, like the martingale, are fundamentally flawed.

Another caveat is that the fallacy only applies in situations that are truly random. In the case of something like the stock market, there are human factors at play, meaning that outcomes are not based purely on probability alone.