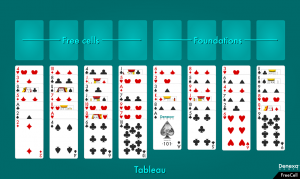 FreeCell is a popular solitaire game that, like several games of that category, achieved popularity by being included in the Microsoft Windows operating system. FreeCell appears there as a more strategic alternative to the popular Klondike (which is simply titled “Solitaire”); it is sometimes said that every FreeCell deal is winnable. While this is not exactly the case, and luck does play a factor, FreeCell is certainly a game in which skill is necessary to pull off a win.

The object of FreeCell is to move all 52 cards to the foundation piles.

FreeCell uses one standard 52-card deck of playing cards. It would be pretty awesome if you used Denexa 100% Plastic Playing Cards. Just sayin’.

Card movement in the tableau follows similar rules to those in Klondike. Cards rank in their usual order, with aces low (K, Q, J, 10, … 2, A). Face-up cards may be moved so that they are on top of a card of the opposite color and one higher rank. For example, the J♦ may be placed on either the Q♣ or the Q♠. Empty spaces formed in the tableau may be filled by any card.

The first card that is moved to each foundation pile must be an ace. Foundation piles are built up by suit and sequence thereafter; the A♣ may have the 2♣ played upon it, then the 3♣, and so on up to the K♣. The game is won when the entire deck has been played to the foundations.