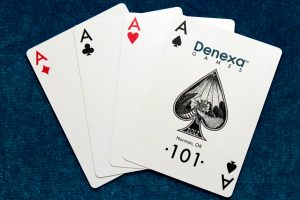 In the card game Cash, also known as Kemps or Kent, the majority of the game’s opportunities for strategy are found in the signals used in the game. The most important rule in choosing a signal is to choose something that works for your partnership! Not all players notice or react well to the same same thing, so get to know your partner and learn what works and what doesn’t.

Keep in mind that part of a successful Cash game is fooling your opponents. Turn the pitfalls mentioned here around on your opponents—watch them to see if they are committing these errors, or commit them yourself with a phony signal to trick your opponent into calling “Counter cash!”

Verbal signals (a spoken word used as a signal) are the easiest to successfully communicate and are therefore also the easiest for your opponents to detect. Most of the time, you will be able to use a verbal signal only once. For this reason, it can be pretty much anything, because even if it’s something that you would obviously never say unless it was a signal, like “shark putty”, all you have to do is call “Cash!” before your opponents can call “Counter cash!” and you’re good.

But if you do want to reuse a verbal signal, you can attempt to camouflage it. You can use a single word and bury it within a longer sentence, for instance. Make sure it’s a word that is common enough that it won’t stick out like a sore thumb, but not so common that you will say it on accident. It should also be something that doesn’t force an awkward change in subject—you don’t want to be talking about your grandmother’s cookies, then suddenly bring up Breaking Bad because that’s your signal word. Something that can help camouflage a signal is deliberately waiting for a few moments before calling “Cash”, in the hopes of keeping your opponents from associating the signal with you winning.

There is some merit in pretending an already-used signal is your code word, when in reality you have since changed your signal. The reason for this, of course, is to trick your opponents into losing by calling a bogus “Counter cash!” If that’s what you’re trying to do, re-read that last paragraph, and do everything it tells you not to!

With non-verbal signals, many of the same rules apply. You will want something natural enough that your opponents will not notice, but conspicuous enough that your opponent will. Practically anything will do—taking a drink, fanning your cards out wider or narrower than usual, fiddling with your watch, slowly swaying your chair side to side. Just don’t pick anything like scratching your head or rubbing your eye—you are guaranteed to get a sudden itch in that spot when the hand starts!

One thing to watch out for is that you don’t fixate on wherever your partner’s signal will be coming from. If your partner will signal by adjusting their glasses, don’t stare at their glasses! Your opponents may notice and start staring too, and will call “Counter cash” whenever they notice anything amiss.

And remember, just because non-verbal signals have a higher shelf-life, it doesn’t mean they have an indefinite shelf life. You should still probably use the same signals for no more than three hands. Your opponents are bound to catch on eventually.

Cash (also called Kemps or Kent) is an interesting social card game for four to eight players. Players form two-player partnerships, competing to make four of a kind, then successfully send and receive a secret signal without it getting intercepted by their opponents.

The object of the game is for one player of the partnership to call out “Cash!” upon receiving a signal from their partner that they have obtained four of a kind. Alternately, notice that one of the opponents is attempting to signal their partner, and call out “Counter cash!” before their partner calls “Cash!”.

All players divide into pairs. The game is best with four players (two partnerships), but can be played with six (three partnerships) or eight (four partnerships). Players may mutually decide a method for determining partnerships, which may be as simple as merely selecting who they would like to be paired with, or by some random process. One such method for a four-player game is to remove two red and two black cards from the deck, shuffle them, and deal one to each player. The players receiving the red cards play against the two with the black cards. Seating arrangements must take care to allow all players to be clearly visible to one another, and partners should not sit directly next to one another.

Prior to the game, each partnership excuses themselves to a secluded place where they are unable to be seen or heard by any other player. They then agree upon a secret signal, which can be a hand signal, innocuous action such as taking a drink or tapping the table with your cards, or a verbal phrase. Signals that might be unintentionally sent, like scratching your head or rubbing your eye should be avoided!

Cash requires one 52-card deck of playing cards. Since players will be quickly grabbing for cards, you don’t want a flimsy deck of cards that will get easily beaten up. Denexa 100% Plastic Playing Cards are made to last and are sturdy enough for even the most rambunctious games.

The dealer calls, “3…2…1…GO!”, then turns the four board cards face up. Each player may then grab whatever board cards they find useful, take them into their hand, and discard back down to four (returning the board to four cards). There are no turns! If two players grab a card at the same time, whoever touched the card first (or whose hand is on the bottom!) is entitled to it.

Game play continues until this card-swapping stops because nobody wants any of the cards on the table. The player with the stock in front of them discards the board cards, then deals a new, face-down board, passes the stock to the left, and flips the cards over with a countdown, as before. (Passing the stock and the board-refreshing duties around the table ensures that the mental overhead of refreshing the board doesn’t burden any player greater than any other.)

Play continues, with players swapping cards out as they see fit, and refreshing the board as necessary.

Some players play that the losing team receives a letter in the word “CASH” (or “KEMPS” or “KENT”, as appropriate), and that whichever partnership spells out the word first loses the match. Otherwise, play can continue indefinitely, with each hand standing alone as a separate game. Partnerships are given the opportunity to change their signal between hands, then all cards are shuffled and new hands and a board are dealt.

A real deal is when the stock runs out without “Cash!” or “Counter cash!” being called. In this case, the hand is a draw. If the game is being scored where partnerships receive letters for losses, no letters are received for a real deal.