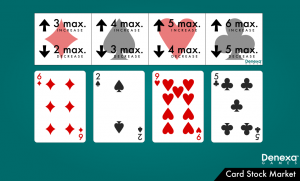 Card Stock Market is, true to its title, a stock-trading game played with cards. It can be played by two to six players.

Card Stock Market was invented by the American game collector, inventor, and author Sid Sackson, and was published in his book Card Games Around the World. Sackson is perhaps best known for previously publishing another stock-trading game, the classic board game Acquire.

The object of Card Stock Market is to end the game with the most money by buying and selling stock.

Card Stock Market uses a 104-card deck formed by shuffling together two standard 52-card decks. Naturally, we like using Denexa 100% Plastic Playing Cards. Two jokers are also used in the game, but they are not shuffled into the deck until later on in the game.

You will need something to keep track of the money used in the game. Each player receives $200 as their opening balance. The best option is to use chips: give each player five white $1 chips, four red $5 chips, and seven green $25 chips. You should also have approximately 40 pieces of each denomination of chips on hand to serve as the bank. If chips aren’t available, play money (such as that used in Monopoly) can serve as an effective substitute.

Card Stock Market also requires an information strip that is used to organize the market and provide information to the players. An example of this information strip is shown above. You can create your own by hand, or download a copy of ours. The strip should be sized so that it is approximately 10 inches wide by 2½ inches high (25.4 × 6.4 cm).

Select one player to be dealer and banker. This player shuffles and begins turning over cards, one at a time. The first revealed number card of each suit is placed face-up under the appropriate space on the information strip. This continues until the banker has placed one card under each suit. The unused cards are returned to the deck, which is shuffled. Then, the banker deals eight cards to each player in batches of two. The deck stub becomes the draw pile (in most other games, we’d call it the stock, but that would get confusing in this game).

The player to the banker’s left goes first. A player’s turn consists of buying or selling stock and changing market values. Each of these options may be done up to twice, but the two actions of the same type must be done together (e.g. a player cannot buy stock, then change the market value, then sell stock). A player may skip either phase of their turn, or only perform one action of that type instead of two. Instead of taking their turn as normal, a player may simply discard up to four cards from their hand. At the end of each turn, the player draws back up to eight cards from the draw pile.

A player may buy stock by placing a card face up on the table in front of them. The pip value of the card indicates the number of shares of stock being purchased. (For the purposes of buying stock, a face card is considered a 5.) This is multiplied by the pip value of the top card of that suit’s market pile to arrive at the total amount due to the bank. For example, if a player laid down the 7♦, and the 4♦ was showing on the market pile, the player would have to pay the bank $28 for the transaction. A player may not hold more than twelve shares of any suit’s stock.

A player may sell stock back to the bank as well. The value of the stock is calculated, as described above. Then, the banker pays the player the appropriate amount, and the sold stock certificate is placed on the discard pile.

If the bank does not have enough money to pay out a player who is selling stock, and no extra chips are available, every player deposits $100 into the bank. If a player has less than $100 when this happens, they pay all that they have on hand. They are then indebted to the bank for the rest and must pay when they can.

A player also has the option to play a card to the appropriate market pile to change the value of that suit’s stock. The change must be within the limits posted on the information strip. For example, if the 9♠ is showing on the spade market pile, a player cannot play the 4♠ to it, since this would be a change of $5, greater than the $3 decrease limit for spades.

A player has two options for playing a face card to the market pile. A player may elect to have the face card increase the value of the stock. When used for this, a jack raises the price to $11, a queen to $12, and a king to $13.

A player can also use a face card to reduce the stock price to $0. Doing so bankrupts the company. All players must discard all of the stock they hold in that suit, receiving no money for their shares.

After a face card has been played to a market pile, regardless of whether it raised the price beyond $10 or lowered it to $0, it can be covered by any number card. It doesn’t matter if the change is within the allowed range or not.

When the draw pile is depleted, all of the cards in the market piles, except for the top card of each pile, are placed in the discard pile. Two jokers are then added to the discard pile. The banker then thoroughly shuffles the entire pile of cards (we recommend performing a wash before shuffling, since the deck will be separated by suit) and turns it face down to form a new draw pile.

Game play continues as usual until a player draws a joker from the draw pile. When this happens, they reveal it to the other players, and the game ends. Each player sells all of their stock to the bank for the current market values. The player who has the most money at the end of the game is the winner.