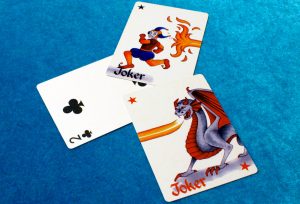 Pluck is a three-player trick-taking game. In Pluck, each player has a trick quota on every hand that they must meet. If they fail to make the quota, they pay the price on the next hand—the players that took enough tricks get to steal from them!

The object of Pluck is to capture tricks in excess of a quota set by the player’s position relative to the dealer. Doing so both scores a player points and allows them to exchange for better cards on subsequent hands.

To play Pluck, you’ll need a special 51-card pack. To make such a pack, start with a deck of Denexa 100% Plastic Playing Cards. Remove all of the 2s except the 2♣, then add in the two jokers. You’ll be left with a deck with aces through 3s in each of the four suits, two jokers, and the 2♣. You’ll also probably want something to keep score with, like pencil and paper.

The two jokers used in Pluck must be different in some way, because one will be designated the “big joker” and the other as the “little joker”. As you might guess from the names, the big joker outranks the little joker. (If you’re using Denexa cards, the red joker, with the dragon, lends itself to being the big joker; the black joker, with the jester, then becomes the little joker.) Be sure that it’s communicated to all of the players which joker is which.

Shuffle and deal out the entire deck. Each player will receive seventeen cards.

The cards rank in their usual order, with aces high. The big joker is considered to be the highest trump, followed by the little joker as second-highest trump, then the ace of trump, and so on.

Each player has their own quota of tricks that they are required to capture on each hand.

Note that the three quotas add up to exactly seventeen tricks, the total number of tricks in the game. This means that if anyone exceeds their quota at all, by even one trick, another player will be short.

Upon looking at their hand, the dealer declares the trump suit. Whoever holds the 2♣ leads it to the first trick. The next player to their left responds by playing a club, if they are able; otherwise, they may play any card they wish. The final player follows in turn. These three cards played to the table are called a trick. After all players have played a card, the player who played the highest trump, or the highest club if none were played, wins the trick. They collect the three cards and place them into a score pile, separate from their hand.

The player that won the first trick then leads any card, except for a trump (see below); again, all players must follow the suit led, if able. After all three cards have been played, whoever played the highest card of the suit led collects the cards and gets to start the next trick, and the process repeats. Players should keep the tricks separate in their score piles; one good way of doing this is to place each newly-captured trick at right angles to the preceding one.

After all seventeen tricks have been played, the hand is scored. Each player counts the number of tricks that they have. A player scores one point for each trick that they collected in excess of their quota. If a player captured tricks less than or equal to their quota, they score nothing for that hand.

After the hand is scored, the player to the outgoing dealer’s left deals the next hand.

Plucking takes place immediately after the cards have been dealt, before the dealer announces the trump suit. The plucking player passes one card, face down, to the player they are plucking from. That player then passes back, also face down, the highest card they hold of suit of the card they just received. Because the trump suit is not yet known, the jokers cannot be passed during plucking.

Game play continues until one player reaches a score of 20 points or more. That player is the winner.