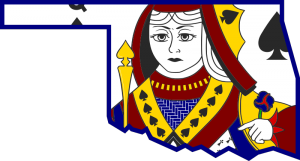 Oklahoma Rummy, also known as Arlington (and not to be confused with Oklahoma Gin Rummy), is a game for two to eight players in the Rummy family. It plays much like a greatly simplified, non-partnership version of Canasta, incorporating the option to draw the entire discard pile into the hand.

Oklahoma Rummy is based on an earlier game named Fortune Rummy, which was popular in the Midwest region of the United States in the first half of the twentieth century.

The object of Oklahoma Rummy is to be the first player to score 1,000 or more points by forming cards into combinations called melds.

Oklahoma Rummy is played with a 104-card pack formed by shuffling two standard 52-card packs of playing cards together. Since you’re playing Oklahoma Rummy, you may as well use some cards from Oklahoma: Denexa 100% Plastic Playing Cards, of course!

Like all rummy games, play in Oklahoma Rummy revolves around combinations of cards called melds. A meld is either three or four of a kind, or three or four cards of the same suit, in sequence. A meld may never contain five or more cards. When a meld is formed, it is placed face up on the table in front of the player. Unlike in other games, players may not contribute to their opponents’ melds. Aces may be either high or low for the purposes of melding, but not both at the same time, i.e. melds may not go “around the corner” from king to 2.

2s are wild and may represent any card, with one restriction. A 2 may not replace the Q♠ in a spade sequence unless it is the only 2 in the meld. You may also form a meld of all 2s without any natural cards.

After drawing, a player may lay down any melds that they have. They may also extend any other melds they have played in previous turns, so long as doing does not cause the meld to exceed four cards. Melding is optional and doing so is not required on every turn, but if it is possible, it is always in the player’s best interest to do so.

The player then completes their turn by discarding one card, face up, to the discard pile. Almost any card may be discarded, even 2s, but the Q♠ may not be discarded at any time.

The hand ends when a player successfully gets rid of all of their cards. Their final card may either be melded or discarded. All players then tally up the value of cards in their melds:

Game play continues until at least one player reaches a score of 1,000 points at the end of a hand. The player with the highest score at that point is the winner.