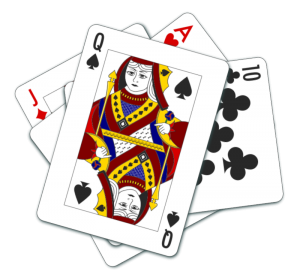 Gong Zhu (拱猪), which roughly translates into English as Chase the Pig or Catch the Pig, is a Chinese trick-taking game for four players, similar to Hearts. The “pig”, of course, is the Q♠, which reprises her role in Hearts as the card to avoid at all costs; here, she’s worth a whopping –100 points!

The object of Gong Zhu is to avoid being the first player to reach a score of –1000 points by avoiding capturing certain cards (chiefly hearts and the Q♠).

Gong Zhu is played with a standard 52-card deck of playing cards. We certainly recommend that you use Denexa 100% Plastic Playing Cards. You’ll also need something to keep score with, such as pencil and paper or a scorekeeping app on your smartphone.

Shuffle and deal the cards out one at a time until the entire deck has been dealt. Each player will have been dealt thirteen cards.

On the first hand of the game, the player with the 2♠ begins play by leading it to the first trick; in every other hand, the player that captured the Q♠ on the previous hand leads whatever card they desire. Each player to the left then plays a card. They must follow suit if they can; otherwise, they may play any card they wish. The trick is captured by whoever played the highest card of the suit led.

When a player wins a trick, they do not add the cards captured to their hand. Instead, they pull out any point-scoring cards (see below) and place them face up in front of them, then put the other cards face down in a discard pile in front of them. The player that won the last trick then leads to the next one.

Game play continues until thirteen tricks have been played, at which point the players have run out of cards. The hand ends at that point and is scored.

The only cards relevant for scoring in Gong Zhu and their point values are:

In addition, capturing the 10♣ doubles the net point value for the hand. So if a player captured the Q♠ and K-Q-8♥, their point score for the hand would be –180; if they captured those cards and the 10♣, their score would instead be –360. (Note, however, that the 10♣ can well be beneficial if the J♦ is captured alongside it. It can also be useful when shooting the moon; see below.) If the 10♣ is captured without any other point cards, it has a value of +50.

No other cards have any bearing on scoring.

Prior to the first trick, the players holding the A♥, Q♠ J♦, and 10♣ may elect to reveal these cards to the other players at the table. In so doing, the cards’ effects are effectively doubled:

If a player chooses to expose a card, it cannot be played on the first trick of that hand where that suit is led. This is to allow the other players an opportunity to get rid of cards that may force them to capture the exposed card. (If the exposed card is the only card of the suit led that the player holds, they must still play it in order to follow suit, as normal.)

The game ends when one player reaches a score of –1000 points. That player loses the game. (If you desire a winner be named rather than just a loser, the player with the highest score can be considered the winner.)