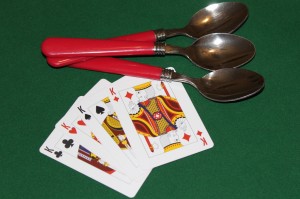 Spoons is essentially a card game version of Musical Chairs for three to six players. Players race to be the first to complete a four-of-a-kind, at which point they grab a spoon, of which there is one fewer than there are players. The person left without a spoon feels very sad about the whole affair.

The object of Spoons is to simply not be the last player left without a spoon.

You will need at least one standard 52-card deck of playing cards. Because Spoons can get out of hand rather easily, it would probably be a good idea to use Denexa 100% Plastic Playing Cards, as other cards may not be sturdy enough to withstand the gameplay unscathed. A single deck of cards will work well for three to six players. If you wish to add more players, add a second deck of cards. It probably doesn’t matter if the backs match up, so you can use the other deck in the set if you’re using a set of Denexa cards.

You will also need some spoons, specifically one fewer than the number of players in the game. Any spoons will do, although plastic spoons may break and produce sharp edges, so it may be better to use your regular spoons from the silverware drawer to avoid any cutlery-induced lacerations. Place the spoons where they are equally accessible to all players. Usually, this is the center of the table, but some players put the spoons somewhere further away to cause everyone to have to get up and race to the spoons (and probably fall over one another along the way).

Shuffle and deal four cards to each player. Place the deck stub to the left of the dealer, this becomes the stock.

Game play begins with the dealer, who draws one card from the stock, and discards one card face down onto the table, to their right. The player to the dealer’s right does the same, drawing the dealer’s discarded card, and discarding to the right, and so on around the table to the player to the left of the dealer, who simply discards into a discard pile to the left of the stock. There are no turns, however—the dealer can immediately draw again as soon as they have discarded, and then discard and draw again, as can every other player in the game. The only limitation is that they may never have more than 5 cards in hand at one time. As a result, slower players may end up with a pile of unprocessed cards to their left as faster opponents send cards down the line toward them.

If, at any point, the stock should run out, the discard pile is shunted over to take its place, and play continues uninterrupted.

When a player succeeds in assembling a four-of-a-kind, they discard their fifth card and grab a spoon. All other players grab one as well, with the player left without a spoon being branded the loser and getting the letter S from the word SPOON. Further letters are awarded for subsequent losses, and when a player has lost five rounds and spelled out the word SPOON they are out of the game. When a player is eliminated, so is a spoon, keeping the number of spoons one less than that of the number of players.

Game play continues until only one player remains.

Pig is a variant of Spoons with less spoons, less grabbing, less potential for injury, and more sneaky gameplay. Rather than grabbing for a spoon, in Pig, the player lays their hand face-down in front of them and places a finger on their nose. They continue to receive cards from their left but merely pass them to the right without looking at them, in the hopes of keeping the flow of the game going well enough that nobody else notices what they are doing. When another player notices the player with the finger on their nose, they do the same, putting their finger on their nose, laying their cards down, and continuing to pass cards. This continues until only one player remains oblivious to what is going on around them. This last player to put their finger to their nose is the loser.