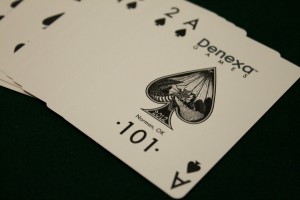 Spades is a trick-taking game for four players, in partnerships of two. While game play (and the name) shows a passing resemblance to Hearts, it would be much more accurate to describe Spades as a stripped-down version of Contract Bridge than anything else. All of the elements are there—partnerships, bidding, and a trump suit—in a greatly simplified form. Most game books agree, categorizing Spades in their chapters on Bridge and Whist.

Spades is a relatively new game, coming to life in the 20th century. Despite being a relative latecomer, it’s popular throughout the United States.

The object of Spades is to accurately predict the number of tricks you will take during a given hand.

Spades uses a standard deck of 52 cards. To make sure you’ll never have to worry about your cards failing you midway through a game, always insist on Denexa 100% Plastic Playing Cards. You’ll also need a scorekeeping apparatus of some type, like pencil and paper.

The players divide into two partnerships, using any convenient method. You can determine partnerships by drawing for it, or just mutual agreement. Partners sit across from one another so the turn of play alternates between partnerships when going clockwise.

Shuffle and deal thirteen cards to each player. This uses the entire deck.

The first item of business to take care of is the bidding. Unlike in Contract Bridge, this isn’t so much of an auction as it is a simple declaration of how many tricks the player intends to take. The minimum declaration is two.

The two partners’ bids added together forms the contract for that partnership, which is recorded on the score sheet for future reference. This is the target number of total tricks for both partners to capture. The individual players do not need to fulfill their own bids. For example, if Alpha bids three and their partner Bravo bids four, it does not matter if Alpha captures six tricks and Bravo only one, since between the two of them they collected seven tricks.

The player to the left of the dealer leads to the first trick. They may play any card they desire. Play continues to the left, with each player following suit if able. If not, they may play any card, particularly spades, which serve as a trump suit. The highest played card of the suit led wins the trick, unless a spade was played, in which case the highest spade wins. Cards rank in their usual order, with aces high.

Collected tricks are not added to the hand, but rather kept in a discard pile in front of one of the partners. Since it is important to keep track of the number of tricks captured, each trick should be placed onto the pile at right angles, so the tricks can be easily separated after the hand. The individual player who won the trick leads to the next one.

After scoring is completed, the cards are collected, and the next player to the left of the previous dealer deals a new hand. Play continues until one partnership reaches a predetermined number of points. This is usually 500, although the threshold for winning can be lowered to 200 if a quicker game is desired. Whichever partnership has the higher score at that point wins the game.