Home » Blog » How to shuffle the casino way

How to shuffle the casino way

Shuffling is one of those things that people often learn at a young age, when they first start playing card games. Usually, though, whenever your parents taught you how to shuffle cards, they didn’t teach you the way that the casinos use. And that’s a bad thing—most players shuffle cards in a way that threatens game integrity, by exposing cards while they shuffle or not adequately randomizing the cards. If you host regular card game nights—especially poker nights—learning to shuffle correctly is a valuable skill that will ensure that your games go smoothly.

The standard casino shuffle consists of the following procedure:

A wash or scramble is typically only used in a casino at the beginning of a game, when the deck of cards is still in the order it was packaged in. In a home game, you should, at the very least, perform a wash at the beginning of the game or whenever the cards have been recently verified. You should consider performing a wash more frequently when playing a game like Crazy Eights that tends to result in the cards ending up in some sort of identifiable pattern. In a game with quick hands and frequent shuffling, like poker, you should skip the wash for most shuffles to avoid bogging down the game.

The number one key to avoiding the exposure of cards is to keep the cards low to the table. The cards should never be more than an inch or so off the table. The intuitive method by which someone squares up, say, a pile of papers is to lift it off the table and tap its edges against the table. Keep yourself from falling into this habit when dealing with cards. It shows off the bottom of the pack to anyone who cares to look, and many of the other cards sticking out at odd angles will expose their indices. Develop the habit of squaring up the pack with your fingers without picking it up off the table. 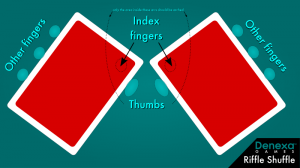 Now, complete the shuffle by rotating the two interleaved packs so that they are parallel to one another (but still intermixed). Push the two packs together until you can square them up into one shuffled pack. Do not perform the “bridge” maneuver, where the entire pack is arched to push the two halves together, as this can unwittingly expose cards.

The strip shuffle is, on its own, not a very powerful shuffling technique. In combination with the riffle shuffle, however, it helps to further randomize the deck by rearranging blocks of the deck, helping to break up runs of cards that remained together through the three riffles.

The strip shuffle is, essentially, the beginning of a riffle shuffle. Hold the pack in landscape orientation, then pull the top fifth or so of the deck off the top, keeping it close to the remainder of the deck, and set it down next to the pack. Then do the same with the next fifth of the deck, placing it on top of what was the top fifth, and so on, until the entire deck has been gone through in this way.

After completing the strip shuffle, do one more riffle shuffle, and then you’re ready for the cut. After that, it’s time to deal!