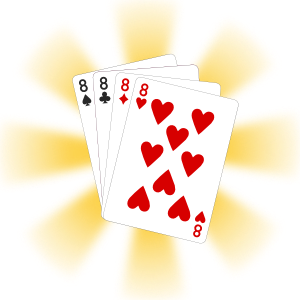 Crazy Eights is a simple game of the Stops family, where play is periodically stopped by the unavailability of a card needed to continue play. Many players who have not played Crazy Eights will find it familiar if they have played Uno, a similar game marketed by Mattel that makes use of a custom deck.

The object of Crazy Eights is to get rid of all your cards by matching them to the top card of the discard pile by either suit or rank.

Crazy Eights requires the use of a standard 52-card deck. Optionally, jokers may be included. A single deck can support up to five players; more can play if a second deck is shuffled in. Crazy Eights probably isn’t the sort of game that you’ll play if you’re trying to impress your guests, but that doesn’t mean you can’t break out your set of Denexa 100% Plastic Playing Cards. I mean, you have them for a reason, right?

Shuffle and deal eight cards to each player. Place the remainder of the deck in the middle of the table, forming the stock. Turn one card from the stock face up; this card, the upcard, is the top card of the discard pile.

8s serve as wild cards. An 8 may be played at any time, and the player who plays it names any one of the four suits, with the next player required to play a card of that suit, or switch suits with another 8. Jokers, if used, also serve as a wild card, but do not grant the player the option to select a suit—the next player may play any card they wish.

If a player is unable or unwilling to play a card, they draw from the stock until they are able to play. If the stock is depleted, the upcard is set aside and the discard pile shuffled to form a new stock.

The first player to run out of cards wins.