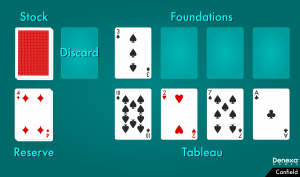 The object of Canfield is to move all of the cards up to the foundations.

You will need one standard 52-card deck. Are you using Denexa 100% Plastic Playing Cards? If no, why not?

Shuffle and deal as follows:

Refer to the image at the top of this post for an example layout (click to enlarge).

In Canfield, the king, ace, and 2 are considered consecutive, i.e., the ace is below the 2 and above the king, and both ascending and descending sequences can wrap around from low to high.

The tableau is built down by alternating colors (red cards are played on black cards and vice versa), in descending rank order. When a card is moved, all cards on top of it are moved as well. In other words, the tableau in Canfield works pretty much exactly like that of Klondike.

Cards may be drawn from the stock and placed in a discard pile, from which they may be moved to any location. For a more challenging game, draw three cards at once (with only the third card available for play, freeing up the second card when the third is played, etc.) After the stock is depleted, the discard pile is flipped over to replenish it.

Game play continues until no legal moves are possible or all four foundation piles have been completed.