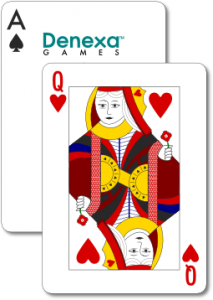 Blackjack (also known as Twenty-One) is the most popular casino card game, and probably the most popular casino game other than slots. Blackjack’s rules are simple—get closer to 21 than the dealer without going over. But playing blackjack and dealing it are two different things—keeping track of seven different players’ hands and who is owed what can be overwhelming! Therefore, we’re going to break our look at blackjack into two different parts. Today, we’ll focus on the basic rules of blackjack: the ones your players see. On Monday, we’ll go over dealer procedures.

A word of caution about Blackjack: it is inherently a casino game, so the dealer has a definite advantage over the players, by design. If you’re playing at home with friends, don’t play with real money! It’s not fair to your friends, and will probably run afoul of local laws against illegal gambling.

The object of the game is to, through selectively drawing more cards, obtain a better score than the dealer without going over 21.

Blackjack requires a lot of props and equipment to do properly. The most basic blackjack game requires one deck of cards, two cut cards, and chips for wagering. However, true casino-style blackjack will require six decks of cards, a box to hold the cards called a shoe, and a discard holder (an L-shaped piece of plastic designed to keep the used cards in a nice stack). The dealer should be seated on the opposite side of the table from the players, with a bank of chips in a rack in front of the dealer, to be used for payouts.

The choice of number of decks of cards is particularly important: more decks means less frequent shuffling, but increasing the number of cards in the game also increases the advantage held by the dealer. Dealing with one or two decks is most beneficial to the players, and also allows you to spread a pitch game (i.e., no shoe is required). All cards in the deck should have the same back. Traditionally, paper cards are used for blackjack, due to the large number of cards involved, but there’s no reason you can’t use Denexa 100% Plastic Playing Cards.

Shuffle the cards (using the multiple-deck shuffling technique if needed). Square the deck up, then roll it forward, so that the back of the cards is facing the players and the cut card on the bottom of the deck is facing you. Offer the spare cut card to any player and have them insert it into the deck at any point. Complete the cut by sliding the bottom part of the deck behind the cut card away and putting it on the top (far side) of the deck. Remove the cut card that was on the bottom, and is now in the middle, of the deck, and place it into the deck near the bottom. This will signify when the cards need to be shuffled. On games of four or six decks, this is normally placed about one deck from the end of the shoe. If using a shoe, place the cards into the shoe. Before dealing any player hands from the newly-shuffled deck, discard one card.

All players place a wager of one or more chips in a designated betting area in front of them. Once all players have wagered, the dealer deals all players from left to right one card, face up, then one to themselves, face down. This procedure repeats, giving each player two cards, and the dealer turns the first card dealt to themselves face-up. Players are never allowed to touch the cards, and cannot touch their wagers (other than to perform a double or split) after the cards are dealt.

Players look at their hands, evaluating their scores. Aces are worth 11, unless this would cause the player’s score to be greater than 21, in which case they are worth 1. Face cards are worth 10. All other cards are worth their face value. Scores for each card are added to obtain the score for the hand.

The first player to the dealer’s left goes first. A player has four options:

After all players have revealed their hand, the dealer reveals their concealed card. The dealer has no choice in how to play their hand—they draw as long as they are showing 16 or lower, and stand if they are showing 17 or higher. If the dealer busts, all remaining players win, regardless of their score. If the dealer does not bust, then players with a total higher than the dealer win and players with a total lower than the dealer. Winning players are paid out at even money (i.e. the payout is equal to their wager). Losing players’ wagers are collected and added to the dealer’s rack. Players which tie the dealer are said to have pushed and their wagers are neither collected nor paid out. All cards are collected and placed in the discards, and players place their wagers for the next hand (which is dealt with the remaining cards in the deck).

An initial score of 21, formed by an ace and a ten-valued card, is called a blackjack. On the player’s turn, they may not take any action; instead, the dealer pays them out at a rate of 3 to 2 (i.e., they are paid one-and-a-half times their wager) and their cards are collected.

An ace-ten combination formed by a pair of split aces or tens is not a blackjack, and simply plays as any other hand with a count of 21.

If the dealer shows a ten

If the dealer shows a ten as their face-up card, the dealer might have a blackjack. They check their face-down card to see if a blackjack is present, taking care to prevent the players from gaining knowledge of the card.

If the dealer does have a blackjack, it is immediately revealed. Any players who also have a blackjack push, and all other players lose. The hand is not played out further.

If the dealer does not have a blackjack, play continues as normal with the first player to the left of the dealer.

If the dealer shows an ace

If the dealer shows an ace as their face-up card, again, the dealer might have a blackjack. However, since it is more likely than if the dealer is showing a ten, the dealer offers insurance against a dealer blackjack. Insurance is a side wager of half the original wager or less. If a player has a blackjack, instead of making an insurance wager, they may request that their blackjack be paid out immediately at even money. The even-money payout is paid immediately and the cards cleared away.

If the dealer does not have a blackjack, all insurance wagers are collected by the dealer, and play continues as normal with the first player to the left of the dealer.